The Circle of Fifths - a tutorial

Status
Not open for further replies.

Circle of Fifths
Circle of fifths because you circle around it.

It is the relationship of key signatures as you move through them, pure and simple.

In all there are 21 key signatures. This is because each note can be named as flat (b), natural or sharp (#)

We can conceivably bend both ends of this sequence to create a circle that wraps around itself: 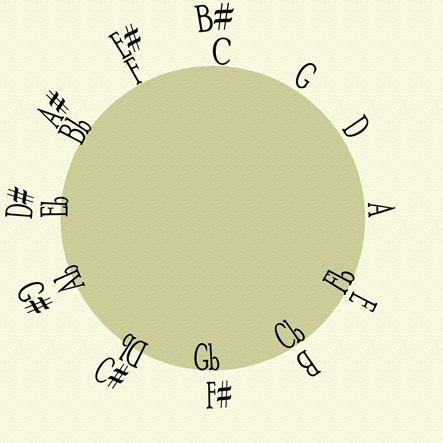 But notice that the two ends are not lined up. In fact, they wrap, spiral like, around to reach the start again at B#.

Upper and lower tetrads
When we construct major scales we start from the concept that there is a fixed pattern of notes applied to every possible starting note:

T(one)-T-S(emitone)-T-T-T-S.​
Let's break that down a bit, because it looks like there might be some symmetry inside of that:

Now let's go back to the original circle of fifths. Filling in each of the scales, we can see the upper and lower tetrad pattern being continually updated as we move from Fb to C#. Looking more closely, we see that each new key after Fb uses the upper tetrad of the preceeding key as the lower tetrad of the new key, i.e. each scale is prefaced in the upper tetrad of the scale before it in the Circle of 5ths. This is a partial explanation of why there is such a strong link between the dominant (the key a 5th above) and sub-dominant (the key a 5th below) to the main key. 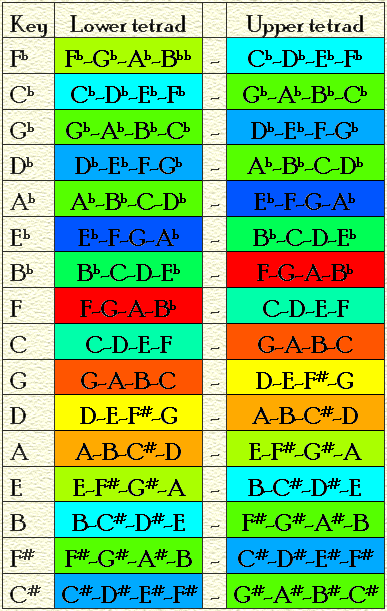 The table is colour-coded to show where the same tetrads (regardless of actual note name) occur.

All Killa, No Filla!

Thanx for the toot, Bandcoach...I neeed to get this drilled in my head! LOL!
A

CrunkNationEnt said:
Thanx for the toot, Bandcoach...I neeed to get this drilled in my head! LOL!
Click to expand...

I agree! Kind of, I figured I'd use theory as a map instead of rules.

AchieveBeats said:
I agree! Kind of, I figured I'd use theory as a map instead of rules.
Click to expand...

That's a good attitude and the rules (which are really just a synthesis of what has worked before) are simply signposts along the road you want to travel........
Q

Hey bandcoach, I was on youtube and stumbled across a wonderful lady by the name of Karen Cuneo Ramirez.. Her videos are pretty informative, much like your posts...But HER circle....is slightly different. I remember in one of her videos, I would link you to it, but I am not even sure which video it was..But she mentioned that the difference does not matter..I would like to hear your opinion on the matter though...

Basically... The circle looks identical to yours..

If you look at it like a clock, the circle Mrs Ramirez made goes:


Whereas your circle, is the opposite..


So I was just curious as to why there are multiple teachings of how to set up the circle?

Yep, not a problem on that one at all.

The circle is also mistakenly called the cycle. this is because they are both focused on the relationship of each pair of notes/keys being a 5th apart.

The circle of 5ths is about the tetrad relationship between subsequent keys.

The cycle of 5ths is about the relationship between chords within a key and by extension, the borrowed and exotic chords that can be played within a particular key.

As for which side the sharp and flat keys should go on, it makes no difference. Traditionally it has been set up so that we move clockwise from flat keys to sharp keys - the important thing is that we recognise a movement of a fifth when we do move through the circle. We could just as easily put C at the bottom, defying all tradition.....

Well that helps me out some...

I've been getting better at picking a scale, and making chord progressions...but sometimes I get stuck on which chords I should continue to use.. Thats when I stumbled upon that lady's videos, and the circle she drew up, I guess would be considered the CYCLE of 5ths, since pretty much..it tells you which chords are played in a chord progression.. Meaning, if C is at 12:00....G and F are to the left and right..So the 3 main chords in the key of C are C, G, and F....and if you go further down the cycle, you find the 3 relative minor chords are E, A, and D........It made a little more sense to me than what I am probably explaining it..

I've tried to get into the Circle of 5ths, but always had trouble comprehending it....But when I came across the Cycle, something clicked....So perhaps I'll understand the circle soon, since obviously I'm beginning to understand more about this stuff finally. Thanks for the reply too....I look forward to your next tutorial
S

Thanks a lot for this explanation. I've been looking for a break down like this. Really great.
I

Even going to school for music, the Circle of Fifths was odd to understand. But useful when you did.

Status
Not open for further replies.