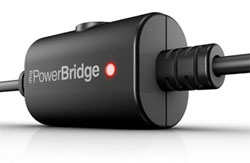 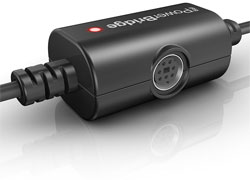 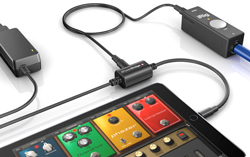 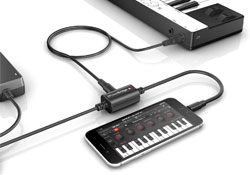 The only system for continuous music creation
There's no doubt that the iPad and iPhone have become a platform of choice for mobile musicians around the world, thanks to the wide range of music creation accessories that can be connected to iOS devices and the wide range of music creation apps. However, one problem still remained unsolved. With only one Lightning (or 30-pin) port available, it was not possible to connect a music creation accessory like an interface, mic or controller and keep the mobile device charged for long extended playing sessions without running the risk of exhausting battery power - until now.
iRig PowerBridge is one of the first solutions to the unique problem musicians face when using their music apps on their iPhones and iPads for extended periods of time by allowing them to use their IK Multimedia mobile interfaces and MIDI controllers while supplying a continuous stream of conditioned charging power to their device. Players simply plug their IK Multimedia digital accessory into the iRig PowerBridge via the included Mini-DIN cable, then plug the iRig PowerBridge into their device via the Lightning or 30-pin connector. Once plugged into a power source, iRig PowerBridge provides a continuous supply of conditioned power for charging and non-stop operation plus a pristine digital audio signal path and MIDI control data.

Pure conditioned power
iRig PowerBridge delivers extremely pure power. It combines a power supply with an ultra-low noise power conditioner that connects to a power outlet on one end and a Lightning or 30-pin iPhone, iPad or iPod touch on the other. Between both ends is a female Mini-DIN connector that can be used to connect any IK Multimedia digital iRig accessory with a Mini-DIN or Micro-USB port. Through this connection, iRig PowerBridge allows continuous charging while also passing along audio and MIDI information between the digital iRig accessory and the iPhone, iPad or iPod touch.

Energized performances
iRig PowerBridge lets musicians keep their iPhone, iPad or iPod touch charged while they play with IK’s powerful range of digital iRig accessories. It’s perfect for guitarists who want to rock out on stage with the full tone sculpting power of AmpliTube and iRig HD or iRig PRO. Vocalists, too, can plug in high-fidelity digital microphones like iRig Mic Studio or iRig Mic HD for use with IK’s versatile VocaLive professional vocal processor. And keyboardists and pad-players can plug in iRig Keys, iRig Keys PRO or iRig Pads for endless jamming with SampleTank, iGrand Piano and iLectric Piano.

Pricing and availability
iRig PowerBridge comes in two versions — one for Lightning and one for 30-pin — and it’s available now from music and electronics retailers worldwide, and from the IK online store for $/€69.99 (excluding taxes).

To use iRig PowerBridge, users will need to upgrade their chosen iRig device’s firmware