iRig 2 - The sequel to the most popular mobile guitar interface


The sequel to the most popular mobile guitar interface 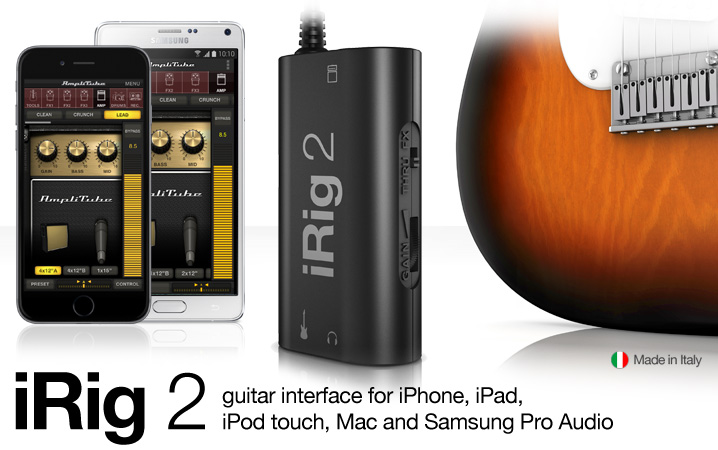 Announcing iRig 2, the sequel to our groundbreaking and best-selling iRig guitar interface. iRig 2 builds on the design that made its predecessor so popular. It pairs great sound and streamlined convenience with new updated features like versatile input gain control, a ¼” amplifier output jack and Android compatibility. iRig 2 makes for a versatile tool that’s perfect for practice sessions, live performances, jamming with friends, recording and more.


Now everyone can plug in their guitar or bass to enjoy killer tone on their iPhone, iPad, iPod touch, Mac or Android device — with the release of iRig 2, the world’s most popular guitar interface is better than ever before.


Powerful performance
The biggest update that iRig 2 brings is its new ¼” amplifier output. This augments its 1/8” headphone output by allowing musicians to use iRig 2 and their mobile device along with their favorite amplifier, without the use of an adaptor. This opens up a whole world of opportunities when paired with AmpliTube, IK's powerful guitar and bass multi-effects processor. iRig 2 now lets musicians easily use AmpliTube’s vast library of meticulously modeled virtual stompbox effects, amplifiers and other gear as a part of their physical rig.


iRig 2’s added switch allows dual-mode operation: FX lets musicians send to the Amp ¼” output a processed signal from apps like AmpliTube. THRU sends a clean signal, letting musicians use their mobile device as a tuner, recorder or other utility, while using their classic analog rig keeping the pureness of a 100% analog signal path.


Made for both practice and performance, iRig 2 comes with a removable support that together with a velrco strip allow easily mounting iRig 2 on any mic or music stand, making iRig 2 perfectly at home on live performances as well.


Plug and play simplicity on every device
iRig 2 has been made to be compatible with the widest range of instruments and mobile devices possible. Its built-in universal 1/8" TRRS output connector provides a true plug-and-play experience on iPhone, iPod touch, Mac and Android. Likewise, its 1/4" instrument input works with any guitar, bass or line-level instrument. To ensure the best sound quality, iRig 2 comes with an input gain thumbwheel that allows musicians to dial in the perfect setting for their setup — iRig 2 works just as well when its connecting a wailing 3 humbucker electric guitar to a Samsung Galaxy Note 4 as it does a jazzy archtop or mellow electric piano to an iPhone 6.


Killer guitar tone on Android
iRig 2 is now widely compatible with Android smartphones and tablets. Its 1/8” output connector is compatible with many popular Android devices produced by manufacturers like Samsung, LG, Motorola, HTC and more — any device with 1/8” input that supports the CTIA/AHJ wiring standard works with iRig 2.


Additionally, users with Android devices that support Samsung Professional Audio can enjoy AmpliTube for Android, a special version of the popular multi-effects processor that brings a full spread of meticulously modeled virtual gear to the Android platform.


A full suite of apps
iRig 2 is ready to go right out of the box. It comes with a powerful cross-platform suite of apps and software that includes free versions of AmpliTube for iOS, Android and Mac/PC. And while iRig 2 is the ideal companion to AmpliTube, it also works with any other recording, processing, tuning or music app.


Pricing and availability
The new iRig 2 interface will be available in Q1 2015 via the IK Online Store and select music and consumer electronics retailers worldwide for $39.99/€29.99 (excl. taxes).