AmpliTube Orange released for iPhone, iPad, and iPod Touch
[h=4]Guitar and bass players can now rock out with the iconic Orange tones everywhere they go[/h] 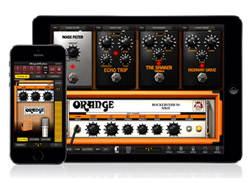 Officially licensed and developed in close partnership with Orange Amplification, the new AmpliTube Orange for iPad and for iPhone/iPhone Touch is a real time mobile Orange Amplifier and effects studio featuring digital models of 5 classic and modern Orange guitar amplifiers and one Orange bass amplifier. Each amp and cab model has been meticulously recreated in both looks and sound to deliver spot-on Orange tone any time, everywhere.

This new app offers 5 guitar amps and one bass amp. Guitar amps included are the 40[SUP]th[/SUP] anniversary reissue of the single channel “pics only” original OR50, the ultra-versatile “dirty” channel of the Rockerverb 50 MKII with multiple gain stages, the dual-channel 200-watt Thunderverb 200, the simple yet powerful original Tiny Terror “lunchbox amp”, and the straight ahead “British voiced” AD30. For bass players, AmpliTube Orange also spotlights the single channel vintage inspired AD 200 Bass MK 3 offering a huge range of bass tones from ultra clean to pure dirt and grit.
The App also features perfectly matched Orange speaker cabinets as well — the 4x12” PPC, 1x12” PPC, 2x12” PPC, 2x12” AD30 and the 1x15” OBC. The cabinets are individually selectable, so they can be mixed and matched with other amp heads for different sound possibilities.

Even though Orange doesn’t make stompbox effects, IK Multimedia has created 4 vintage styled Orange-inspired effects to make AmpliTube Orange a versatile stage and studio suite. After dialing in their favorite tones, players can start recording thanks to AmpliTube Orange’s built-in recorder (which can be expanded via in-app purchase). AmpliTube Orange also makes a perfect practice tool, thanks to its built-in “Song” section, which allows a user to import any audio from their device iTunes library and play along.


To learn more about AmpliTube Orange for iPhone click here