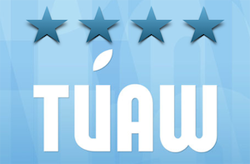 Here are quotes from Steven Sande's review of iLoud from TUAW:


"IK Multimedia iLoud portable speaker lives up to its name."

"Sound quality was really impressive, with fairly good high-end response -- something I've found lacking in a lot of portable speakers."

"As you'd expect, low frequencies were amazingly well-reproduced with this unit. Volume? Well, if there's a portable speaker that goes to 11 (obligatory 'This is Spinal Tap' reference), it's the iLoud."


"Pairing with the iOS devices was a no-brainer and Bluetooth worked well for streaming music to the unit."


"Whether you're a musician who wants a solid speaker for impromptu rehearsals or small gatherings, or just a music lover who wants a decently priced high quality portable speaker, the iLoud should fit the bill in either situation. When paired with IK Multimedia's other offerings for musicians, the iLoud rounds out a wide-ranging lineup of audio tools that are perfect for the iOS device-toting musician or music lover."


4/4 STARS AWARD for iLoud from TUAW!


Read the award-winning review of iLoud from TUAW.