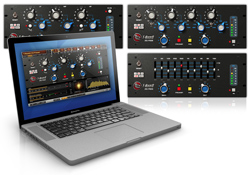 
An EQ for every occasion
The latest update to T-RackS Custom Shop features three powerful and versatile EQs modeled on modules from the late-‘60s and early ‘70s that were ubiquitous in major American recording studios: EQ P50A is a good “all around” general-purpose three band EQ. EQ P50B is a four band EQ with two overlapping midrange knobs that allow tremendous flexibility when carving tracks that contain vocals, electric guitars or stringed instruments. The outer bands on both three and four band EQ modules can be switched to shelving mode for additional flexibility and “broad stroke” tone shaping. The EQ P60G is a 10 band graphic design that’s particularly useful when tone shaping needs to be applied to larger areas — it’s perfect for when more extreme boosting and cutting is required, like when fixing a weak snare drum or opening up dull vocal tracks.

On each, IK has gone to great lengths to painstakingly create an accurate analog model of the discrete electronics of the original hardware’s big and warm sounding 2520 op-amp. Similar attention to detail has been placed on the proportional Q feature at the heart of each module: the frequency bandwidth is broader at low gain and narrower at high gain. This approach is faithful to the original, and provides a more focused and less smeared sound to your mixing.

A time honored American classic… made better
The hardware modules that these EQs are based on are widely considered to be classics — they’ve been featured on countless timeless mixes and hit records. It would be easy to just model them and stop there, but IK’s team of engineers have gone one step beyond to harness the power of the digital realm to make these modules even better. All EQs feature workflow improvements that make it easy to immediately grasp the settings layout right from the get go. For instance, on the three and four band EQs the dual concentric layout of the knobs has been purposefully split for greater visual clarity and ease of use when compared to competing emulations of the same hardware.

Sonically speaking, each EQ has also been augmented to feature precise knobs with 1 dB (1.5 dB in the extreme part of the knob’s range) gain resolution, which offers greater flexibility than the 2 dB to 3dB sported on the original hardware. This allows for finer adjustment when a more subtle touch is required. In addition, on top of the great sounding EQ circuits, each module is equipped with a preamp stage modeled on a circuit design of a similar legacy and vintage. The addition of this feature opens up a dramatically wide sonic palette bursting with warm tone and creative possibilities. It provides a harmonic distortion that you simply can’t get with other manufacturers’ emulations of these EQs.

Pricing & availability
The T-RackS Custom Shop for Mac/PC is a free DAW plug-in and standalone app that gives producers, engineers and musicians 24/7 access to some of the most sought-after studio production gear of all time. To access the EQ P50A, EQ P50B, EQ P60G and the many other gear models available in the T-RackS Custom Shop, users need to download T-RackS version 4.7 for Mac and PC. The processors in the Custom Shop are sold using Gear Credits and are priced at 125 Gear Credits or $124.99/€99 each. Gear Credit Packs start as low as $19.99/€15.99 (for 20 credits) and go up to $749.99/€599.99* (for 1,500 credits).
*Prices exclude taxes.