Save over 35% off iRig MIDI 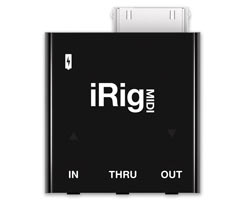 Now you can go mobile with your favorite MIDI device for an incredible price. iRig MIDI is an ultra-compact standard Core MIDI interface for iOS that connects any MIDI compatible device to the iPhone, iPod touch, and iPad. For the month of May, we will be offering a massive discount on iRig MIDI - over 35% off!


iRig MIDI connects MIDI keyboards, drum machines, drum pads, pedal boards and more to an iOS device to control not only the included SampleTank FREE* but also a world of MIDI-compatible apps such as GarageBand®. You can also use iOS apps to control external MIDI equipment such as sound modules, DAWs or lighting systems right from the mobile device.


iRig MIDI is the only compact iOS MIDI interface sporting 3 MIDI ports: IN/OUT/THRU. These connect to any standard MIDI jacks using the included 2 x 1.6m/5.2' cables. iRig MIDI also has 2 LEDs for displaying the MIDI activity on the IN and OUT ports.


iRig MIDI also exclusively provides a micro USB port – with included cable – that connects to any standard USB power supply source so that the iOS device can stay fully powered during long sessions.