In-App Special: Up to 50% Off AmpliTube Recorders & AmpliTube Studio

In-App Special: Up to 50% Off AmpliTube Recorders & AmpliTube Studio
[h=4]Turn your iPhone, iPod touch or iPad into the ultimate mobile multi-effect processor and recording studio[/h] 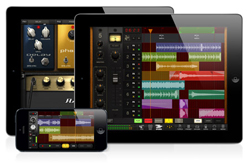 IK is proud to offer AmpliTube, AmpliTube Fender, AmpliTube Slash, AmpliTube Jimi Hendrix and AmpliTube Orange users up to 50% off the Recorder through in app purchase. From now until August 21st, 2014 you can get the multi-track recorder inside your favorite guitar app for a great price. AmpliTube users can also save up to 50% on the Studio and Studio + Recorder in-app purchase as well.


Inside AmpliTube's multi-track recorder, you can use the handy “Apply FX” feature to subtly or radically change the sound of your recorded vocals and instruments without having to re-record them. Capture your ideas quickly by recording your performances with the built-in recorder featuring re-amping capabilities, then share your track by exporting high quality audio files or M4As – all in the convenience of your iPhone, iPod touch or iPad.


Take advantage of this limited time offer and get 50% off on a multi-track recorder inside: AmpliTube, AmpliTube Fender, AmpliTube Slash, AmpliTube Jimi Hendrix and AmpliTube Orange on both iPhone or iPad. Offer expires August 21st, 2014.


IK’s In-App Recorder Special is available in the following apps:

The in-app Studio and Studio+Recorder are only available inside AmpliTube for iPhone and iPad.