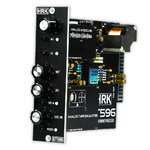 The ST596 is an Analog Harmonics Processor dedicated to professional music producers and studio engineers.


The ST596 adds harmonics and saturation to any music material providing full control of the harmonics amount and the Dry and Wet signal level.


The ST596 is based on the Custom HRK Analog Modeling circuitry built with discrete components, which produces a complex spectrum of harmonics.


The ST596 does not significantly change the overall peak level of the processed waveforms, nor distort the source signal, like in the common saturation studio hardware.


The ST596 is easy to use and intuitive controls make tracking, ramping, or mastering a quick and satisfying job.

Did you try countless DAW plugins to get the “true sound” and “analog warmth” of the vintage studio preamps or consoles? Have you noted that all plugins sound similar and if you add more plugins the result is only less satisfying?


It is not much you can do about it… The DAW plugins are the only emulation of the analog circuits and your computer is not capable to calculate the mathematics involved in complex physical processes which happen every nanosecond in the analog hardware.


Have you tried to patch the signal through the clone of the “vintage” mic preamp or compressor, only to battle with noise, hum, and ground loops for hours?


You won’t win with the laws of physics. Every time you add the gain the noise floor will rise and every cable conducts the electric current, which may create the ground loop…


The ST596 is a solution for all the above and many other problems which almost every music producer or studio engineer has encountered.


Learn more about how the ST596 can help you to enjoy your work.


The common way of producing the harmonics is to overdrive the signal with analog hardware. Usually, the gain has to be increased to achieve the desired results, which also raises the noise and hum levels, normally residing below the audible threshold.


Hardware components such as the thermionic valves, transformers, and discrete circuits produce harmonic distortions and this process can be described by the mathematical equations.


Simplified equations are used by the computer programs, the audio plugins, to simulate the properties of the analog hardware. More advanced plugins use expensive DSP cards to offload the main CPU and deliver more realistic results.


The term Operational Amplifier, which is the most common electronic component today, has its roots in the long-forgotten past when the mathematical calculations were done by the analog computers built with amplifiers capable of conducting mathematical operations. Hence the name.


The Analog Modeling Circuitry used in the ST596 does the math of generating harmonics in the real-time analog domain. No digital approximation, no latency, no CPU bottleneck!


The ST596 does not increase the gain of the processed signal keeping the noise as low as possible. It just adds the harmonics to the source signal.


Although the processed signal can be perceived as louder due to the higher harmonics content, the peak level of the signal remains almost the same.

The ST596 Analog Tape Emulator circuitry is based on the discrete germanium and silicon transistors, including the FET transistor, and delivers the subtle final touch to the processed signal.


The tape harmonics can be blended with the Tape Mix knob.


The LF Resonant circuit can be engaged with the onboard jumper, which is useful for vocals and the lead instruments.