Hello there, fellow headbangers! First of all, I'd like to apologise for not doing a review last two weeks. I was really into watching the Fifa World Cup, and was left with little to no time to think about music at all. I'm really sorry, it wont happen again, I promise! Now, let's move on for this week's heavy metal album review: it's from a french progressive metal band called Adagio (with obvious influences from melodic death and black metal). Here's "Archangels in Black"! 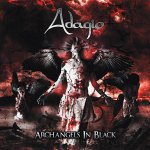 Who are they? Adagio was founded in 2000 by french guitarist Stephan Forté, and had it sound heavily influenced by the power metal sub-genre. You can listen to this style of playing on their first two studio albums (Sanctus Ignis and Underworld). From their third album (Dominate) and on, they started playing a more progressive metal style with clear influences from melodic death metal, neo-classical metal and black metal. The band never really had a stable line-up, with only it's founder guitarist (Stephan Forté) and bassist (Franck Hermanny) as original members. The band has released four studio albums and one live album until now.

Album Review: Archangels in Black is a very intense album, from start to finish. From the first guitar notes of "Vamphyri" to the last notes of "Getsu Senshi", the album shows us a band focused on bringing us heavy guitar riffs (I did a little research, and they use the dropped B tune on their guitars), fast double bassdrum patterns, and beautiful dark orchestrations. The vocals (provided by vocalist Christian Palin) range from the lyrical to shrieked in a matter of seconds (specially on the track "Undead"). The highlights of the album are the opening song "Vamphyri", which shows us exactly what the band will bring us with the album, the song "Fear Circus", the song "Undead", and the song "Archangels in Black". You know what? pointing "highlights" in this album is a little bit useless. The whole album is worth the "highlight" word before it! You'll bang your head with this, for sure!

Where to buy: here
P

No worries, Bro. I realize that everyone need time to grieve, LOL (don't hit me)

Pumpthrust said:
No worries, Bro. I realize that everyone need time to grieve, LOL (don't hit me)
Click to expand...

To be honest, I wasn't grieving. I was celebrating! I was cheering for Germany as well as Brazil.
P

Ddream said:
To be honest, I wasn't grieving. I was celebrating! I was cheering for Germany as well as Brazil.
Click to expand...

One of the ladies I work with is from Brazil and was all devastated and shit. I don't follow sports, so I was like, "whats wrong with Lima?" and they said Brazil lost the world cup.

Pumpthrust said:
One of the ladies I work with is from Brazil and was all devastated and shit. I don't follow sports, so I was like, "whats wrong with Lima?" and they said Brazil lost the world cup.
Click to expand...