Hello there, fellow headbangers! This week's album is probably one of the most important bands inside the Folk Metal scene, plus they're from my home country Brazil! Here's Tuatha de Danann's "Tingaralatingadun"! (yes, even I have difficulties on spelling this album's name!) 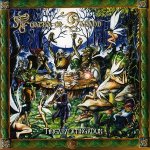 Who are they? Tuatha de Danann was formed in 1995, under the name "Pendragon" and aiming to make heavy metal mixed with celtic and medieval instrumentation and fantasy themes. After a couple of demos, the band released their debut album (the one which is being reviewed here, today!), an EP (The Delirium has just begun) and another album (Trova di Danú). The band reached it's peak when they started touring throughout Europe, specially France and Germany. And, yes, when I said Germany, I was referring to Wacken Open Air! After the recording of a live (unplugged) DVD in 2009, the band went though a hiatus and just recently was reformed, and started playing gigs thoughout Brazil and South American countries as well. The current line-up is: Bruno Maia (lead vocals, guitar, flute, whistle, mandolin, bodhrán), Giovani Gomes (harsh vocals, bass), Rodrigo Abreu (drums, percussion) and Edgard Britto (keyboards).

Album Review: Tingaralatingadum is a beautifully composed album, mixing elements of heavy metal (I can see influences of Iron Maiden and maybe some Judas Priest) with melodic parts from celtic origins, plus passages with harsh vocals (In my opinion, one of the best harsh vocals in the world). You can feel that all the songs are of a "light" nature in comparison with other bands in the sub genre (as Týr and Cruachan), and the fantasy stories told through them will definitely take you on a trip. There are plenty of jesting tones on the album, with all the "gnome-choir" complemented by interpretations of different characters by Bruno Maia (as seen on the track "Finganforn"). The highlight of the album are the songs "The Dance of the Little Ones", "Behold the Horned King", "Tan Pinga Ra Tan" (with it's beautifully melodic lines), "Celtia" and "Tingaralatinga Dum: The Dwarves Rebellion". If this abum is so good, as I said, why 4 out of 5 then? Well, the album suffers from a somewhat muddy mixing, but it doesn't, in any way, overshadow the brilliance of those compositions. A must buy to the fans of the genre, or even to those who want to venture through a land full of fantastic creatures!

Where to buy: here
S