Hello there, fellow headbangers! This week's album is a true example on how heavy metal should be done! Here is Nocturnal Breed's "Fields of Rot"! 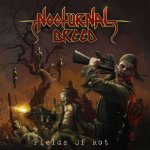 Who are they? Nocturnal Breed was formed in 1996, by singer/bassist Kenneth Svartalv (S.A. Destroyer) and guitarist Sven Atle Kopperud (Ed Damnator, a.k.a. Silenoz), and throughout their carreer, they were joined by many known black metal musicians, like Astennu, Tjodalv, Nagash and Shagrath (all of them of Dimmu Borgir at the time), and aimed their compositions as a mix between the speed and agressiveness of thrash metal with the skrieked vocals and thematics of black metal. Nowadays the line-up of the band stabilized with S.A. Destroyer on vocals/bass, I. Maztor on lead guitars, Tex Terror on drums/backing vocals and V. Fineideath on base guitars.

Album Review: Mixing the agressiveness of thrash metal with the shrieked vocals of black metal plus shredding guitar solos, Fields of Rot is a fast paced, heavy album which a little resemblance to Motörhead early albums. The mixing is good enough to gives us the opportunity to clearly listen to every instrument (even the bass, which is somewhat undeserved in this sub-genre). S.A. Destroyer gives us a powerful interpretation on his vocals, literally screaming like a madman, while I. Maztor graces us with some very good shredding guitar solos. This album is one of the few that I can say ALL TRACKS are the highlights, specially "Iron *****", a direct tribute to aforementioned Lemmy's band. Definitely a must buy/listen, if you're into trash and/or black metal, or even if you are into any kind of agressive music, as well!