Hello there, fellow headbangers! This week's album is from one of the most dark sounding in the world, both lyrically and musically. They are also known by the "love or hate" feeling from the public, here's Cradle of Filth's Cruelty and the Beast!

Band: Cradle Of Filth
Album: Cruelty and the Beast 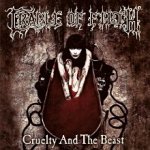 Who are they? Cradle of Filth hails from Suffolk, England and were formed by Dani Filth in 1991, with it's sound oriented to symphonic black metal, which evolved into a fusion of different, yet dark, styles mainly after their 1996 EP "V Empire or Dark Faerytales in Phallustein". With a constant change of members though the years, the only original member still on the band is the vocalist Dani Filth. While this constant change of member is seen as something that can negatively affect a band, Cradle's compositions are always evolving, bringing some very interesting passages, riffs, and lyrical themes. The band is known worldwide, and has already made live gigs on every continent since it's conception, even participating on big events like Wacken Open Air and Ozzfest.

Album Review: Cruelty and the Beast is a concept album, based the story of the infamous Countess Elizabeth Báthory, who was known, at the time, to torture and kill hundreds of girls between 1585 and 1610. Some accounts even tell about the countess bathing on the girl's blood, to try to maintain her youth forever. Now, back to the album: The album is very well composed, with excellent drum lines provided by Nicholas Barker (who also played on Dimmu Borgir), some of the best guitar riffs ever made provided by Stuart Anstis and Gian Pyres, complemented by the shrieks of Dani Filth and the classical singing of Sarah Jezebel Deva. But, the album lacks some more power on the drums and the bass, which gives a little "emptiness" feeling to it. Nothing that takes away the brilliance behind it, but, in my opinion, the album would sound a little better. Tracks that deserve special attention are "Thirteen Autumms and a Widow", with it's fast drum lines and the typical shrieks, "Cruelty Brought Thee Orchids", one of the most famous Cradle's songs, and the epic "Bathory Aria", with it's 11:02 minute mark and mixture between fast passages and melodic, dark lines. A must buy for any dark metal connoisseur!