Hello there, fellow headbangers! Deviating a little from last week's black metal genre album, this week's is one of the best death/thrash albums released by a brazilian band. Here's Torture Squad "Hellbound"! 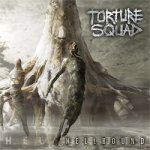 Who are they?: Torture Squad is a brazilian death/thrash metal band founded in 1990, and putting out a very agressive style of thrash metal (with influence from teutonic scene acts like Kreator and Destruction), with elements of death metal, like blast beats on drums (provided by the excellent drummer Amilcar Christófaro) and distorted vocals provided by Vitor Rodrigues. The band has already toured around europe, even playing on big festivals, like Wacken Open Air in 2007.

Album Review: Hellbound was the first album I bought from the band, and I was very impressed at how agressive it is. Fast drums, typical of thrash metal, with elements from death (like blast beats) provided by Amilcar Christófaro, well accompanied a heavy bass guitar by Castor, killer guitars by Maurício Nogueira, and excellent vocals by Vitor Rodrigues. You feel like you're inside a pandemonium when listening to this album, as there's no time to breath here! It feels like every riff is a punch directly aimed at your face! Another high point of this album is it's production, clean and crisp, provided by Heros Trench and Marcello Pompeu (from the band Korzus). All 10 tracks are good, but my favorites are Living for The Kill, The Beast Within, Chaos Corporation, Cyberwar and Hellbound. Again, this one will tear your neck apart!