Hello there, fellow headbangers! This week's album is one of the best recordings ever made inside the so called "second wave of black metal", that happened mainly in Norway. Here's Burzum's "Filosofem"! 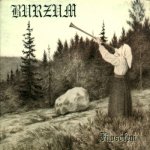 Who are they?: Rather than "they", we should say "him". Burzum is a one-man-band formed by the infamous musician Varg Vikernes, being one of the most influential bands on the norwegian black metal scene, often cited as influences by black metal bands from around the world. Since it's beggining, the "project" (as Varg calls Burzum), wasn't meant to make live presentations, being a studio band only, and focusing on a more "raw" or "unpolished" sound quality, often associated with the second wave of black metal.

Album Review: Filosofem was recorded between 1992 and 1993, but only released in 1996 (while Varg was in prison, for murdering Euronymous from Mayhem), under the Misanthopy Records label. The album was intentionally recorded on the worst conditions possible, so the guitars were plugged into an old stereo, and then recorded into cassette tape, and the vocals were recorded using a simple headset. Despite of this poor recording condition, the album turned out as one of the best works on Burzum's catalogue. All the tracks are quite long (the shorter hitting the 7:05 mark), and explores a more "minimalistic" structure inside black metal, and also it's dark ambient nature. It has more melodic elements than the previous Burzum albums, showing the process of maturity of Varg compositions. The tracks "Burzum", "Jesu Død" and "Rundtgåing av den transcendentale egenhetens støtte" (with it's 25:11 minimal ambient structure) and Decrepitude I and II, are the highlights of the album. A "must listen" to any fan of both black metal and ambient music.

Where you can buy it?: Here

See you next week!
P

Keep this up, Ddream!

Pumpthrust said:
Keep this up, Ddream!
Click to expand...