So, I decided to do reviews on Heavy Metal albums, both old and new, from big names to the most underground of the nordic frostbitten scene.
I think it is a great opportunity that you all get to know some pretty good bands, others not that great, and maybe be inspired to listen/buy to their album.

These series of reviews are going to be released on a weekly basis, and will be in the following format:
- Name of the band;
- Name and image (if available) of the album;
- Year of release of the album
- Sub-genre of Heavy Metal;
- A rating of said album (on a scale from 0 to 5)
- A brief history of the band
- A analysis of the album as a whole, pointing it's good characteristics, as well as it's bad ones.
- A link to where you can buy it.


I know that many of you might be asking: "Who the hell this guy is to make reviews on heavy metal albums?", so I'll answer:


I listen to Heavy Metal since I was 14 years old (that was 17 years ago!), and all started when a friend of mine lent me a copy of "Ride the Lightning" by Metallica. This album changed my musical life!
I was impressed by the heaviness, speed, by the rasp vocals and melodic basslines. Since then, I've been dwelling more and more into various sub-genres of heavy metal, and today I must say my preffered ones are Black Metal and Death Metal.
I now own a collection of almost 1500 cds of various bands, ranging from Metallica to Fimbulwinter (I bet you haven't heard of the second one), and I sometimes do reviews on a brazilian Heavy Metal website called "Whiplash".
I'll do reviews on some albums I own, and as well some albums I come across and are being released as this series goes on.


So, without further delay, let's go to this week's album:

Band: Anaal Nathrakh
Album: Hell is Empty, and all the Devils are Here 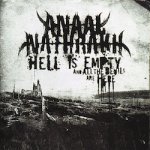 Who are they? Anaal Nathrakh is a british extreme metal band, formed by Mick Kenney (as Irrumator) and Dave Hunt (as V.I.T.R.I.O.L.) in 1999. Their first albums were more in the vein of a raw black metal, and on later works they also added grincore elements to their compositions. Although the band was meant to be studio only, they've started touring in 2005, and since then, they are playing gigs on lots of festivals, like Inferno Metal Festival and Tuska Open Air Metal Festival.

Album Review: "Hell is Empty..." was the first album I got from this british band, after a friend of mine said they mixed black metal with grindcore, and also some "clean vocals". Later on, I discovered that "clean vocals" to Anaal were shouted vocals in chorus. Anyways, I was intrigued by this, and was surprised on how good this mixture of different elements (specially the "clean vocals") sounded! The songs are brutal, well structured, and leave you no time to breath. Downtempo passages are scarce, and even so, are accompained by fast double bassdrum patterns, specially on the more melodic parts. If you pay attention to the drums, you'll notice that some parts are quite difficult for a human to play. Well, that is because there isn't any human behind the kit! All Anaal Nathrakh songs are composed with a drum machine, programmed by Irrumator. The hightlights on "Hell is Empty..." are: Der Hölle Rache Kocht In Meinen Herzen, Shatter the Empyrean, Lama Sabachthani and Genetic Noose. This album got a 5 out of 5, because of it's agressiveness, brutality, and mixture of different elements. It'll definitively make your neck sore!

Where you can buy it? Here

See you next week!