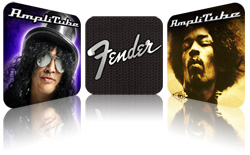 Now is the time to get the most popular guitar and bass multi-FX app and take your mobile guitar playing to the best level technology has to offer. You get 11 stomps, 5 amps, 5 cabinets, 2 microphones, recorder, SpeedTrainer, Tuner/Metronome and the ability to expand your arsenal with more gear from AmpliTube Slash, AmpliTube Fender™ and AmpliTube Jimi Hendrix. Use IK’s AmpliTube iRig, iRig HD, iRig PRO or iRig Stomp mobile interfaces to connect your guitar, bass or keyboard to your mobile device and you are ready to rock! You can also use the iRig Mic to process and record vocals and acoustic instruments with this powerful mobile suite.


Apps on Sale during this promo:

Complete Bundles are also available through in-app purchase in: